Since 2019, the Department and the Center Pompidou have signed a partnership agreement. They combine their expertise to jointly carry out their mission of raising public awareness of contemporary art, with a view to supporting the territories in the development of common ambitions, and to make the Departmental Cultural Center of Saint-Riquier a place of artistic requirement in all areas. 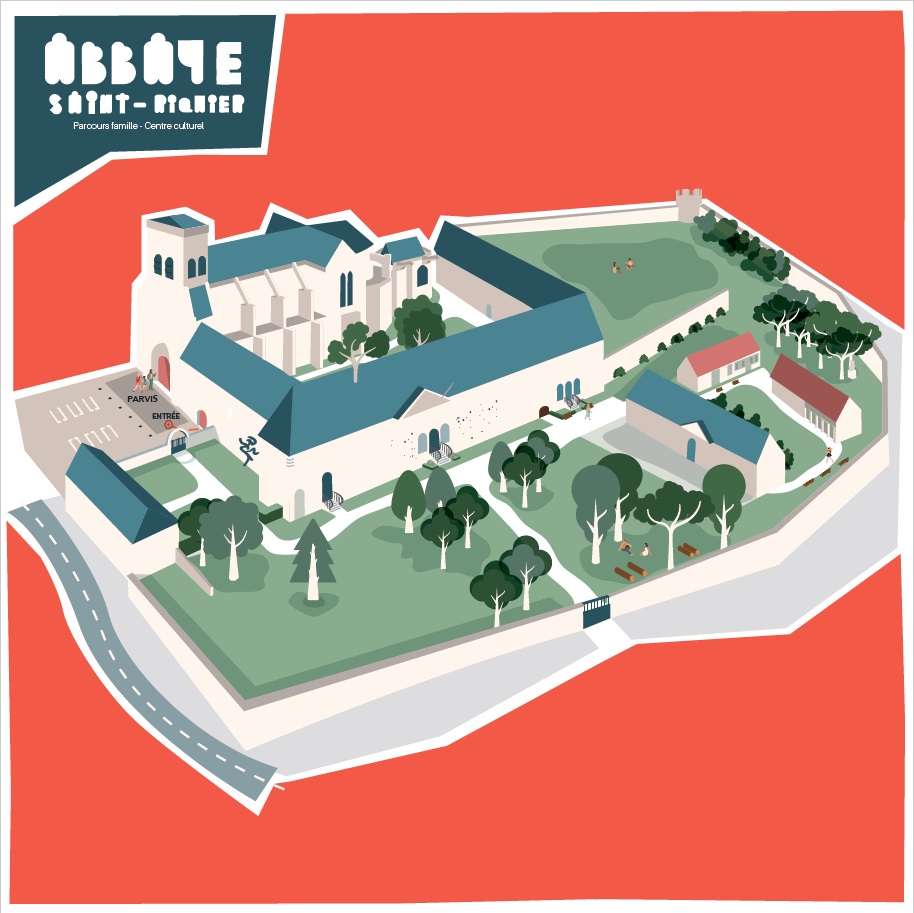 The family trail is intended for families, in the form of a card to take with you, to discover the site of the Departmental Cultural Center of Saint-Riquier. It was made by the Parisian screen printing studio Fwells. The idea of ​​this card is to approach the heritage dimension of the site from a new angle, to bring into play its history and its characteristics, by inviting children and their parents to put themselves into action through simple games.

This project involves a class from the Flixecourt College of the Department in the design of an exhibition for the Departmental Cultural Center of Saint-Riquier, in the form of an educational project lasting several months, the culmination of which was a one week stay at the Center Pompidou in October 2020.

The central theme proposed to college students to build this exhibition is the following: voices, words and actions of artists at work. The idea of ​​the gesture at work, and of the voice as a vector of transmission, are a living way of reconnecting with the history of the abbey, with the movements and voices that have inhabited it.

During their stay in Paris, the students were involved in the exhibition design process, with the help of an exhibition curator. In addition to visiting the museum and current exhibitions, they were offered:
- Professional meetings (curator, guide-lecturer, curator, restaurateur, etc.),
- Screenings of films from the collection, pre-selected to be shown in the future exhibition,
- Special tours around the general theme chosen,
- Artistic practice workshops at Studio 13/16,
- Debates during which the students will be asked to use their critical thinking, to defend and assert their choice. 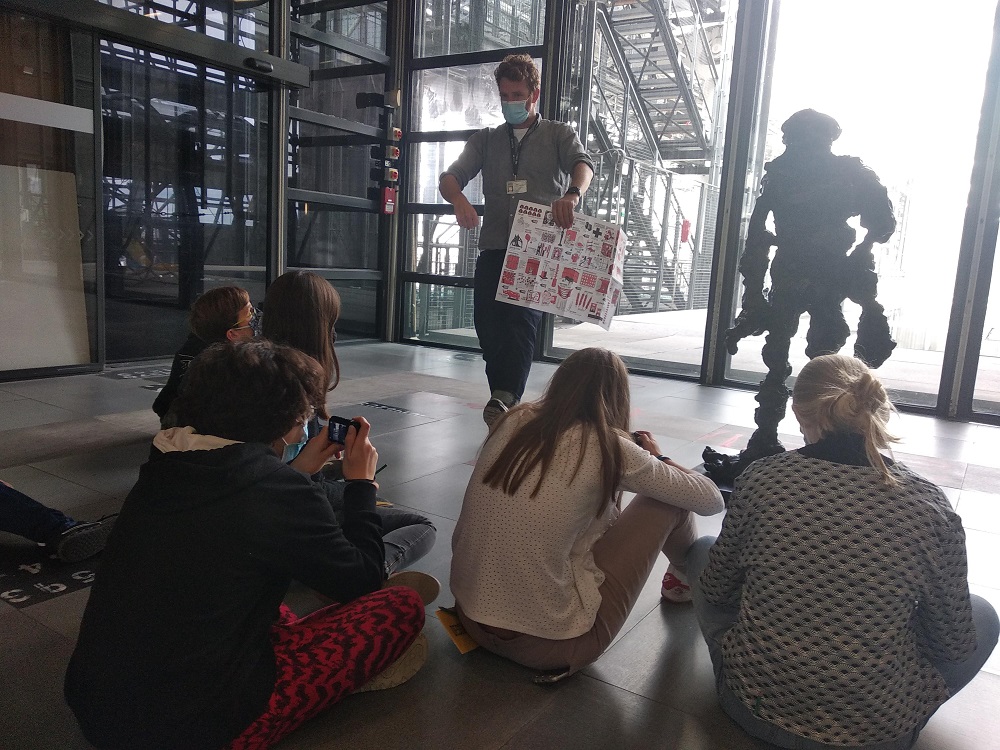 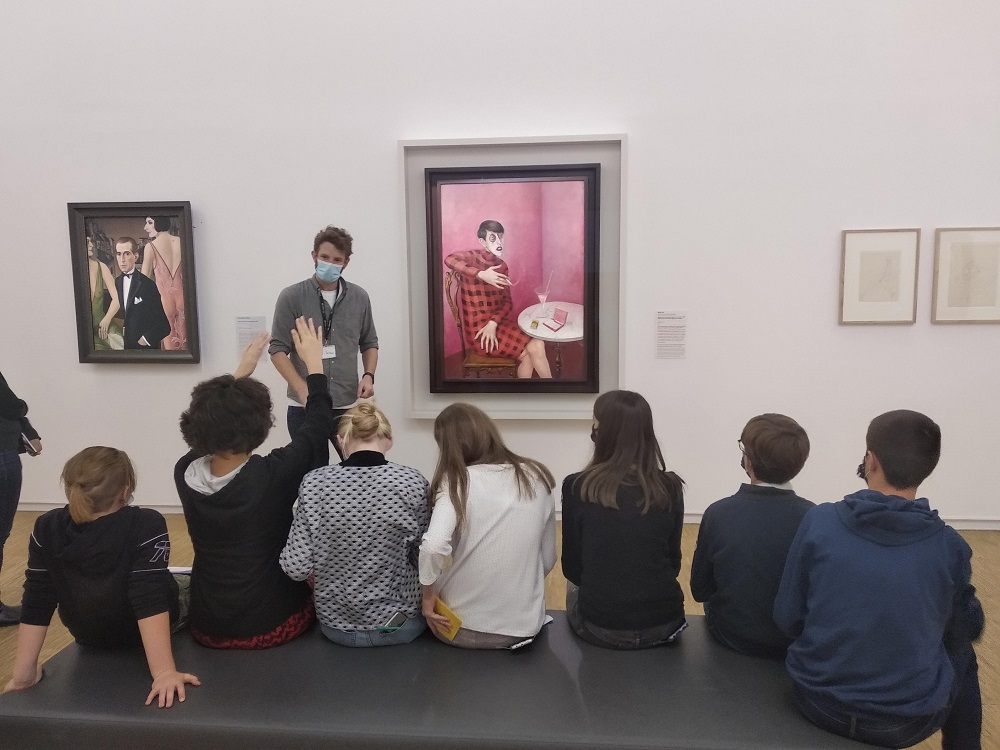 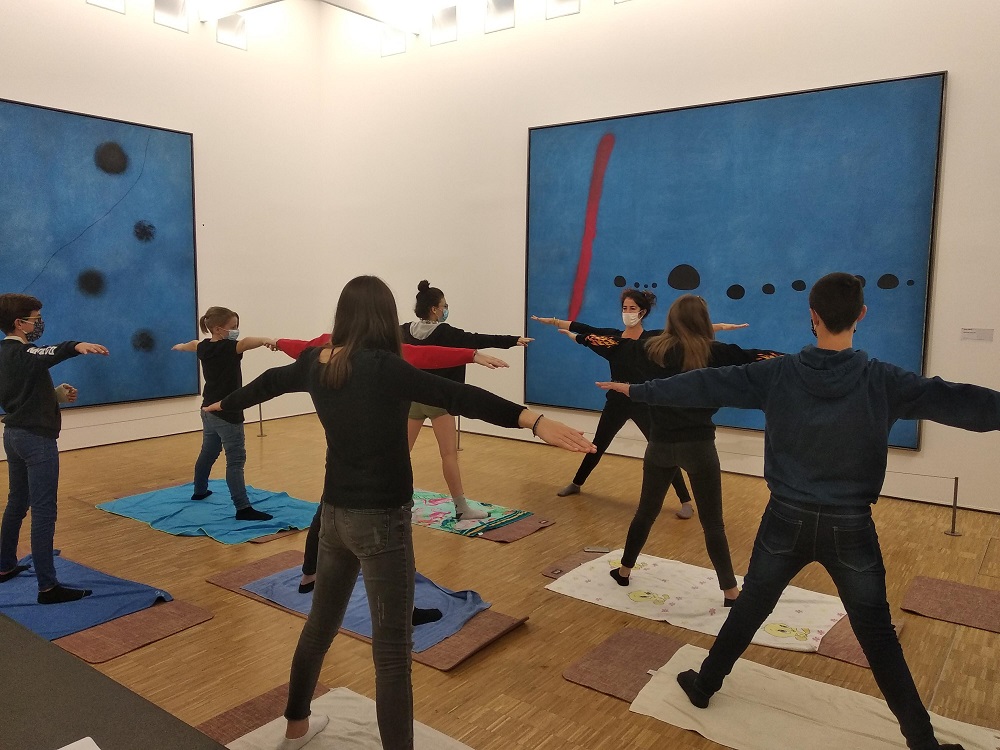 Flixecourt schoolchildren at the Center Pompidou

It will focus on the creation of a device for the park of the Departmental Cultural Center of Saint-Riquier and designed by an artist in dialogue with a vocational school. From conception to completion, students follow the creative process with the artist at different stages of the project, a way of reinscribing craftsmanship in the abbey. The students' know-how is concretely mobilized during a production phase of the work.

Commissioned by the Center Pompidou, designed by designer matali crasset, Saule and the hooppies is an itinerant musical tour that offers an awakening to art and culture for children from 5 to 10 years old.
Combining design, storytelling, music and dance, Willow and the hooppies is both a work and a singing comedy. It allows to become aware the role of everyone in saving the planet and encourages participants, children like their parents, to deploy their energy and their enthusiasm so that the device comes to life by rotating the carousels that compose it. The songs were written and orchestrated by singer and sound artist Dominique Dalcan.
Willow and the Hooppies, is a platform for expression in the image of a remarkable tree, which advocates a return to doing together. It is brought to life by a pedal system driven by the energy of the participants. The main set thus comes to life with the effect of a musical that is sung by everyone. What does a gesture do? What does a movement involve? What movement goes beyond ordinary action to enter into an aesthetic dimension?
For the Abbey of Saint-Riquier, the Center Pompidou has offered a selection of five films by choreographers and contemporary artists who question the thresholds between movement and artistic creation.
In these works, produced over the past twenty years, a set of gestures are mobilized to displace and complicate our daily relationships and choreographic creation: a man interpreting the slogans of his t-shirts insists on the power of clothing as a device. of subjectivation; a conductor moves from the periphery to the center of the stage to become the performer of a choreography; the collaborators of an artist's studio participate through their presence and their gestures in a choreography that subtly invades the daily creative space to produce a filmed work; look-alikes fans of a pop idol, reveal the dramaturgy of their ephemeral transformation and identification in the space of the theater; a group of performers invent a vocabulary of forms inspired by the history of art, and / or media and contemporary events. From projects inspired by very diverse materials and disciplines, these works come together around a common idea: that of carrying out an exploration of the borders and the divisions that inspire research around the arts of movement. These researches and discoveries suggest that the world of dance is inspired by and belongs to our daily lives as well as to that of the theater space.

VALÉRIE BELIN & I COULD NEVER BE A DANCER
Duo of scenographers based in Paris, Performance, 2013
Duration: 30 ’ 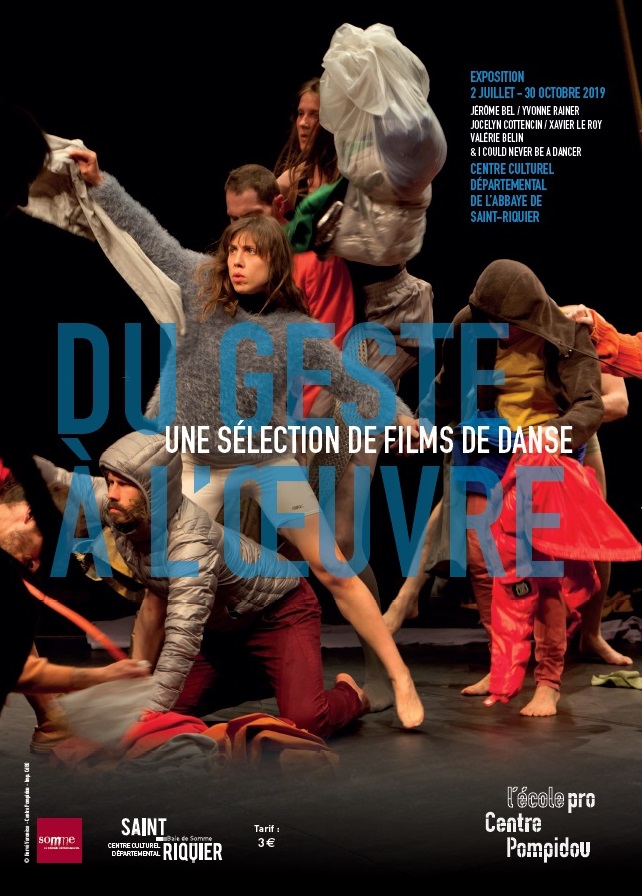 Playful and participatory, the Mobile Baby Station has been designed as a new nomadic and modular territory for 0-2 year olds and their companions. The Mobile Baby Station is a unique space with a strong visual identity. It responds to a desire to bear witness to the importance of the place of toddlers in our society.

It is not just a field of experimentation sensory for toddlers but a real artistic device, thought of as a privileged link between children and parents, as well as professionals, artists and works. The goal of the mobile baby station is to create a bubble, an exceptional moment, outside of everyday life, between the members of the family. It has a role of ferryman at the crossroads that constitutes the basis of the development of the individual and the future achievements.The Mobile Baby Station is a field of exploration and surprises, turned towards the 5 senses where daily life, cares move away and disappear for a time. It is made up of elements of different shapes, colors and sizes. Blocks, bricks, triangles, mountains, bolsters, waves come together to create a metaphorical and dynamic landscape, to inhabit and invest comfortably. It is a factual thread that unites all the protagonists around a work, here, that of a designer, Stephanie Marin.

A few words about the designer STEPHANIE MARIN
Born in 1973 in Marseille, Stéphanie Marin lives and works in Nice. It started in 1990 in textile recycling between Hamburg and Barcelona. Five years later, she developed her ready-to-wear line "Habits Magiques", versatile structures, in natural materials and artisanal dyes, distributed in international brands in the fashion world: 70% of her work is exported. on the continents. In 2003, she extended her research to design and habitat and created the Livingstones pebble cushions. Sensitive to the intangible dimension of design, to the emotions it can provoke, Stéphanie Marin works on the relationship to the body, space and light. Today, its collections are distributed in more than 150 countries around the world, always in the spirit of functional, healthy and aesthetic research, inseparable from its choices of image production and distribution.

Knowing where you are going, anticipating the future and knowing what will make up your tastes and desires of the society of tomorrow. This is the job of a trend maker. Today many companies and factories in the creative field appeal to these visionaries. The workshop invites teenagers to step into the shoes of a visionary designer and create a trendy notebook (or board). From tools made available and a material library composed of samples of fabrics, markers, pencils of colors, magazines, paint, different types of yarns, particular materials, teens create their own board or trend book. The objective of this workshop is to put the adolescent in a situation of reflection and creation around this device. Each notebook or board will reflect an artistic orientation which will then be discussed in class or in the workshop space with the other students. 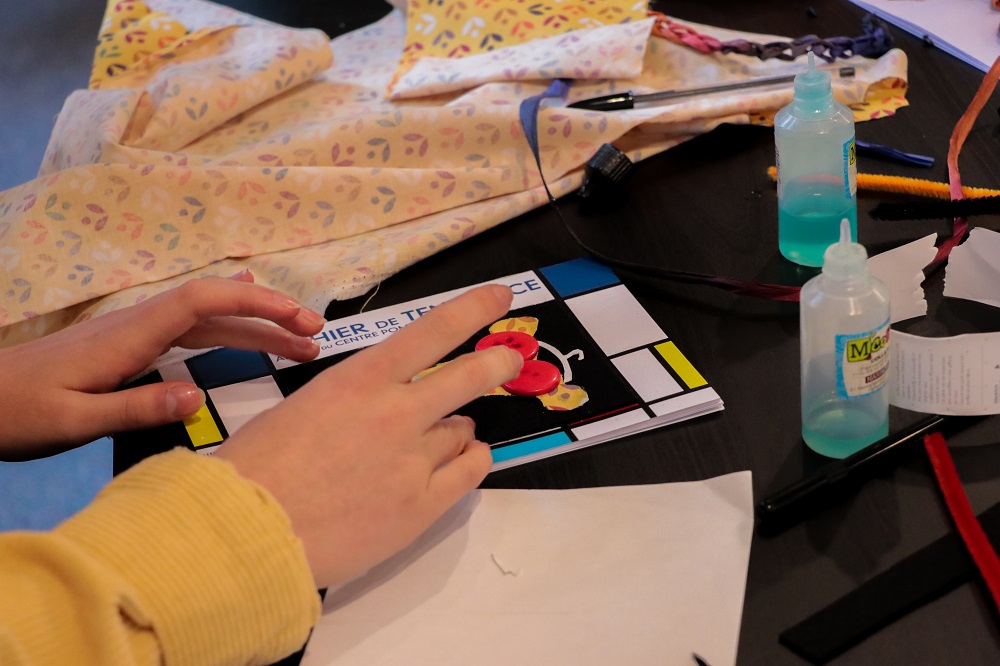